Raising awareness for suicide prevention at ‘Battle of the Countries’

Earlier this year, the Illawarra Shoalhaven Suicide Prevention Collaborative was proud to be the platinum sponsor at ‘Battle of the Countries’, an Aboriginal Rugby League Knockout event with a mental health focus.

Battle of the Countries was hosted by the Illawarra Titans Aboriginal Rugby League Club. The event aimed to raise awareness of mental health and suicide prevention amongst Aboriginal and Torres Strait Islander communities.

“Sadly, the suicide rate for Aboriginal and Torres Strait Islander people is approximately twice that of non-Indigenous Australians, with males three times as likely to die by suicide as females,” said Dr Alex Hains, Regional Manager of the Collaborative.

“With such high rates of suicide in Aboriginal and Torres Strait Islander communities – particularly among men – Battle of the Countries encouraged people to think about their mental and emotional wellbeing,” said Dr Hains.

As part of the event, the Collaborative spoke with people about Question, Persuade, Refer (QPR) training, an evidence-based, one-hour online course which aims to equip people with the skills to help prevent suicide.

“Given the success of this inaugural event, we hope that Battle of the Countries will be held annually, with ongoing support from the Collaborative,” said Dr Hains.

Dale Wright from the Illawarra Shoalhaven Local Health District (ISLHD) and a member of the Collaborative, emphasised the value in communities doing suicide prevention training.

“The players’ passion for sport and working together really stands out at events like these. As part of the experience, teammates were encouraged to think about how they can look out for each other and recognise the warning signs for suicide,” said Mr Wright.

More than 400 Aboriginal and/or Torres Strait Islander players from 20 different teams, including four from the Illawarra Shoalhaven, were involved in the two day tournament, which attracted over 2,000 spectators.

You can read more about the players and teams here.

Free licenses for QPR training are still available! You can claim yours at www.suicidepreventioncollaborative.com.au/training/qpr 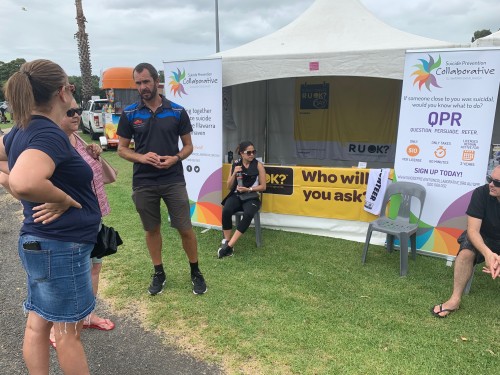